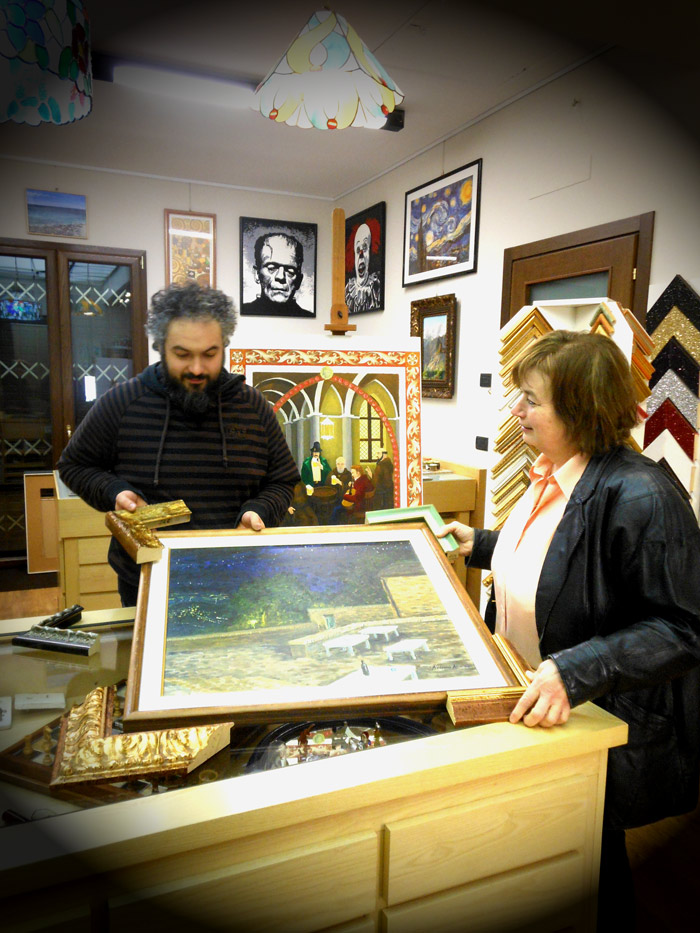 In 2001 Angelo Andreini and his mother Paola Piccari set up “VETRATE D’ARTE”, one of the few artisan workshops remaining in Italy, capable of producing authentic works of art with glass.

This workshop differs from others because of its careful choice of material (strictly top quality and exclusively Made in Italy) and for its attention to detail.

If you are looking for a unique work of art, look no further: whether it be an important furnishing accessory such as a stained glass panel, or simply a small frame, “Vetrate d’Arte” can satisfy your every request.

Andreini Angelo has studied at length the techniques involved in creating the impressive and majestic stained glass windows that embellished the churches in the Gothic period right up to the contrasting light airiness of houses in Liberty style. This solid foundation has provided Angelo with many techniques to create glass in various styles: antique, classic, religious, modern, lead binding, brass and tiffany, using the Grisaille method where necessary, which gives the work a better chromatic and three-dimensional effect.

If, on the other hand, you already have your own glass, “Vetrate d’Arte” is available for restoration and repairs.

This workshop is a marriage of past and present, constantly in search of new techniques and material.
For those wishing to add personality and uniqueness to their homes or work environment, we recommend you choose stained glass with the Dalle de Verre technique, mosaics and furnishing accessories.

If you would like to decorate your walls, we have a wide selection of prints and paintings, or you can commission a personalised one. The workshop has a ample range of sample frames that can be created and decorated by hand

Vetrate d’Arte is also specialised in the repair and restoration of antiques; Angelo Andreini is an excellent wood and glass craftsman.

Availability and professionalism are guaranteed because at “Vetrate d’Arte” they put their heart and soul into their work. 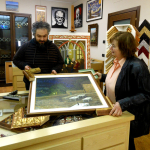 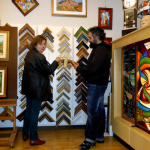 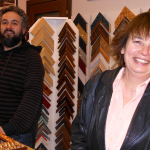 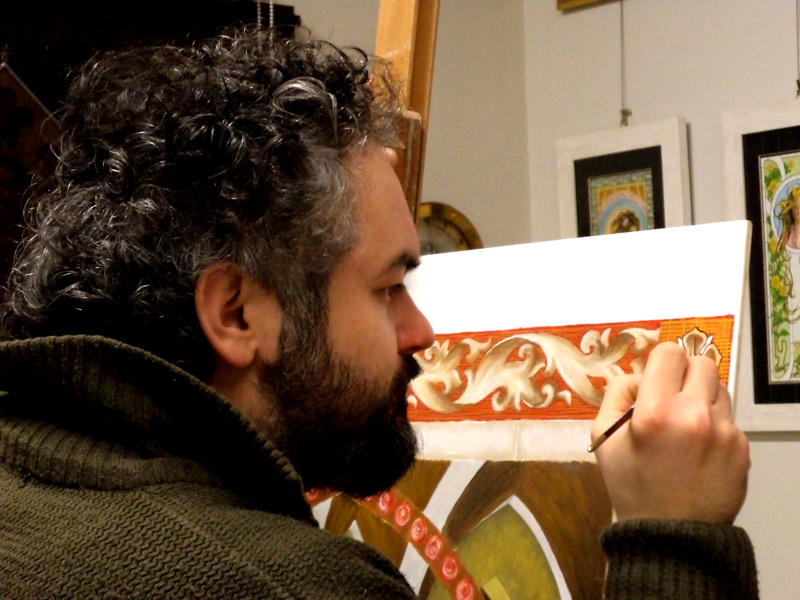 Angelo Andreini was born in Rimini on 10 March 1982 and currently lives in nearby Morciano di Romagna.

From early childhood he learnt the art of glass painting from his mother, Paola Piccari, who worked in the studio, Vetrate Artistiche, run by Antonio Artioli in Morciano di Romagna. Over 15 years she perfected the art of producing glass painting, which in turn she passed on to her son Angelo.

It was this tradition that generated in Angelo a passion for drawing and art in general.

At the age of 13, he took part in an exhibition entitled  “Navy Sculptures” organised by the association, “Navy Adriatic Sea”, with the backing of Professor Filippo Manfron.

In 1996 he enrolled in the Federico Fellini Institute of Art in Riccione (RN) where he took part in various public competitions and in the production of public works.

In 2000 he completed an apprenticeship at the Vetreria Moderna run by Mordini Salvatore, where he gained an in-depth knowledge of glass.

He graduated in 2001 with a diploma in Applied art, advertising design and graphic arts and photography.

In the same year he opened his own stained-glass art studio in Morciano di Romagna where, with the help of his expert mother, he built up an important clientele of private customers and churches, combining drawing and painting with the art of stained glass.

Over the years he has keep abreast of new techniques by attending various specialized courses:

It was during these courses that Angelo developed a strong relationship with Maestro Sante Pizzol, a world-renowned stained glass artist. Thanks to this friendship, in October 2004 the two maestros of glass embarked on a journey to Peru, where they spent 43 days working with and teaching 15 students as part of the Mato Grosso Operation.

During their stay they created two impressive polychrome rose windows (each 3 metres in diameter) depicting  sacred images, destined for a church in Baltimore (USA).

They also produced a glass panel (7×5 metres) portraying the Pentecost and another project dedicated to the Virgin Mary(15×15 metres) for the Pucallpa Cathedral (Peru).

In August of the same year, in Mondaino (RN), he took part in an exhibition, Estemporanea di pittura in notturna with a work entitled “Dipingiamo la Notte”, for which he won first prize.

In 2009 he restored the nineteenth-century glass sign of the “Caffè Grand’Italia” in Novafeltria (PU).

In 2011 he worked on the restoration of the stained glass of the  “Sacro cuore di Gesù” church in Macarone di Cesena (FC).

In 2012 he restored the stained glass of the church in Villamarina a Gatteo a Mare (FC).

Many of his works are part of private collections, whereas others which can be admired include: